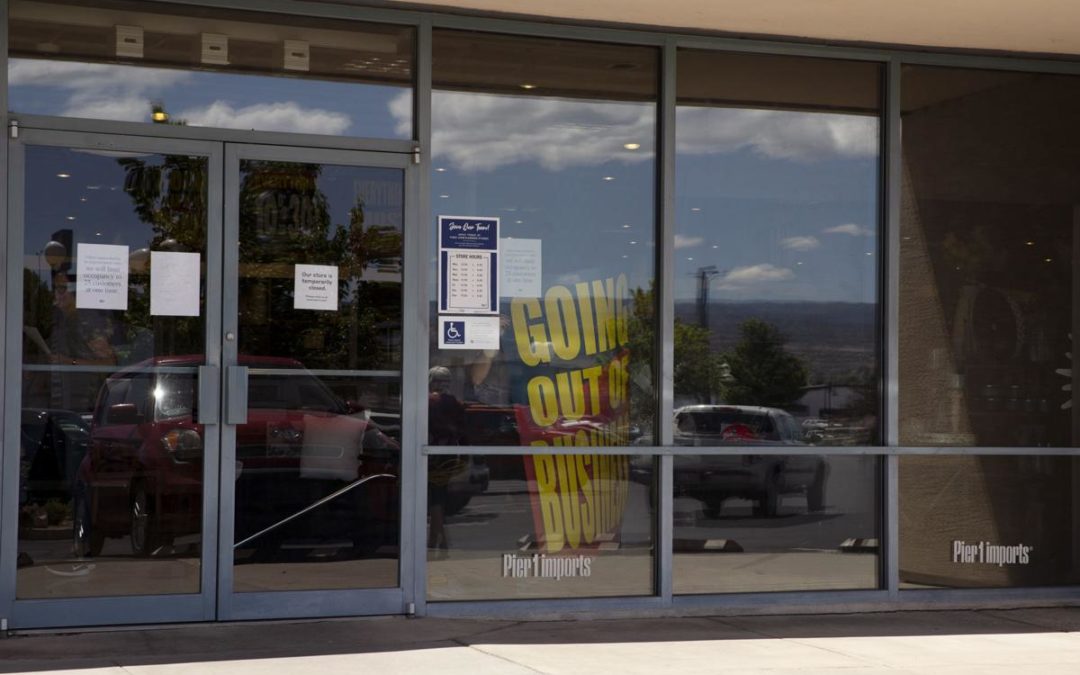 The pandemic just dealt a death blow to what already was a struggling company, just as other major retailers have ended up filing for bankruptcy at a time when COVID-19 has been exacerbating their pre-existing business problems.

Squirrell is a leasing agent who handles the leasing of Pier 1’s Grand Junction location at Valley Plaza by the landlord, Pennsylvania-based K&N Investors. This week, Pier 1 said it plans to close all its stores.

That plan requires court approval due to a bankruptcy filing by Pier 1 earlier this year, before the U.S. economy began shutting down because of COVID-19.

Squirrell said Pier 1’s landlords at Valley Plaza were working with Pier 1, providing the store free rent in hopes of helping the company through its troubles.

“That’s when (Pier 1 officials) were still trying to restructure the company so they could keep like 250 stores open and trying to make a go of it. But that was before COVID-19.

“When COVID came along … two months ago that pretty much killed them.”

Meanwhile, in the last month J. Crew, Neiman Marcus, Stages Stores and JC Penney all have filed for Chapter 11 bankruptcy protection, the Associated Press noted in a story this week. The AP also pointed out that Victoria’s Secret has said it will be closing 250 stores in the next few months.

JC Penney, which has a location at Mesa Mall, reportedly plans to close some 240 stores as part of its bankruptcy plan but hasn’t identified which stores will close.

Diane Schwenke, president and CEO of the Grand Junction Area Chamber of Commerce, said that the companies filing for bankruptcy “were brick-and-mortar retailers in trouble before COVID-19.”

Such companies “were not healthy coming into this, so it’s not surprising that they got even sicker, frankly, as an industry,” she said.

Schwenke has been following with interest what has been happening in China, which has been ahead of the United States in reopening its economy.

There, she said, “Apparel and department stores are not coming back.”

By contrast, she said, in China “grocery stores and technology and other sectors are seeing some pretty broad upward ticks in terms of bringing their customers back.”

“There’s always going to be some type of retail,” Squirrell said.

As weaker ones vacate retail locations, “the stronger ones are going to come in and backfill those spaces,” he predicted.

He said Pier 1 has yet to notify K&N Investors of its plans to leave its 9,000-square-foot Valley Plaza location.

Nevertheless, “I’ve already gotten a call from another broker who says they have a tenant that is interested in the space and when can we get in to look at it,” Squirrell said.

Squirrell’s personal view is that retailers that vertically integrate, offering everything from internet to retail brick-and-mortar sales, will be successful. He thinks Best Buy is a good example. The company uses its stores not just as retail outlets but distribution points, and doesn’t care if people buy its products online or in the store, or pick up purchases or have them delivered, he said.

“All they care is you buy it one way or the other, whichever is most convenient for you,” Squirrell said.

The AP said in its story this week that Best Buy, Target and Wal-Mart are among companies that have used their digital expertise to remain relevant and thrive during the pandemic.

Squirrell also thinks offering flagship stores that make visits an occasion and an experience, like Apple does, is a direction retail is increasingly heading.

Schwenke believes smaller, mom-and-pop companies are better positioned than companies like Pier 1 and JC Penney to be able to serve customers coming out of the pandemic. A favorite example of hers is The Palette, in downtown Grand Junction, which offers painting classes. Schwenke said owner Claire Meil responded to the business restrictions resulting from COVID-19 by selling painting kits that people could pick up curbside.

“Somebody like that, she was never in the business of providing paint-in-a-home kits before March and now she’s got a whole new product line,” Schwenke said.

Meanwhile, at Valley Plaza, Kasey Dillon, manager of Runway Fashion Exchange, isn’t particularly concerned that the coming closure of Pier 1 there could affect business at her store.

“We tend to stay pretty busy here,” she said.

Still, she said, “I would just hope someone that needs a place to go would be able to go in there and get going pretty quickly.”